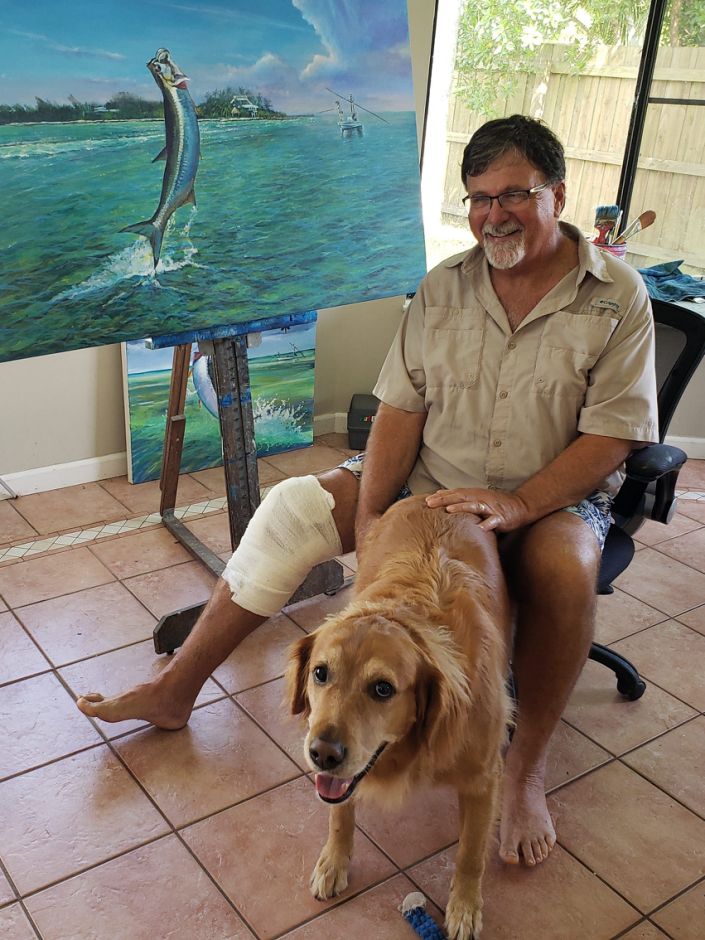 PORT ST. LUCIE, Fla. — Mark Johnson, 61, has lived his entire life around alligators. That’s why he was so surprised when one tried to grab him and drag him into a canal behind his Florida home.

Johnson managed to get the gator to let go of his leg by digging both of his index fingers into the hungry reptile’s eye sockets. Even then, he felt lucky to get away alive.

“I’ve always thought I had a greater chance of encountering a rattlesnake on my morning walks than I did of being grabbed by an alligator,” said Johnson, a marine artist and Florida native. “This was scary. I was cussing the gator out saying, ‘You’re not going to get me into the water.'”

Gator attack
Johnson was walking at about 9:30 a.m. on Sept. 13 along a canal with his 8-year-old golden retriever, Rex. He had seen the gator swimming southbound in the canal past where they were walking. Rex was right at the water’s edge nibbling on grass when Johnson noticed the gator turn toward them.

“I stepped down onto the mud bank and yelled at Rex to get on home. He left immediately, but my Croc got stuck in the mud. As I tried to wiggle it free, I saw the gator lunge out of the water and seize onto the back of my right knee.”

The force of the attack knocked Johnson to the ground. In shock, he twisted around and knew he had no chance at prying open the jaws. But he wanted to act fast before the gator tried to go into its “death roll,” perhaps twisting his leg or a chunk of his thigh and calf off its bone. That’s when he reacted with his fingers to the eyeballs.

Eye to eye
Somewhat to Johnson’s surprise, the gator immediately let go and swam away.

Johnson limped the 75 yards back to his screened porch, blood dripping down his leg. His wife of 25 years, Lou, immediately helped him get into the shower to clean out the wound and wrap a clean towel around it.

They went to a nearby medical center, where the wound was disinfected and treated. He received 12 puncture wounds and about 60 stitches in his leg — plus another five in the index finger on his left hand, where he cut it on the gator’s eye socket.

He said the pain was pretty intense, as much for the force of the jaws clamping down on his leg as the teeth.

Johnson doesn’t blame the alligator. It was just doing what alligators do.

“But it’s important for people to understand how dangerous alligators are,” Johnson said. “If I had been a small child or pet, I wouldn’t have had a chance.”

Johnson said it was important to keep his cool in order to survive.

“You cannot panic. I bass fish all the time, too. I’ll reach down and lift up the bass with my hand. I just got lucky.”

Nuisance alligator
The Johnsons asked their neighbors, the Challenors, to call the Florida Fish and Wildlife Conservation Commission to report the incident.

“You take one [alligator] out and 10 more come along,” Jerry Chanellor said. “This is a swamp. We built our houses in Florida in it, in the alligators’ home.”

The FWC dispatched a contracted nuisance trapper to the scene, but they were unable to locate the alligator.

“The trapper did tell me I was lucky,” Johnson said. “He said the fingers to the eye socket trick doesn’t always work.”

Johnson said when he is able to resume his walks again, he’ll probably be carrying some sort of weapon for protection.

“This image will be on my mind the rest of my life” Johnson told Patch News. I can see it right now. I see my foot. I see the gator. I see the position — his eyes. He had green eyes. The teeth were pearly white, no stain or anything.”